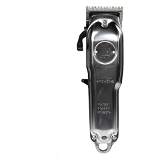 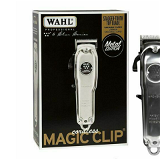 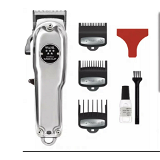 At first glance, the Wahl Magic Clip Metal Edition looks identical to the Wahl 100 Year Anniversary clipper. However, they differ in a few ways.

First, the Magic Clip Metal Edition features a plastic taper lever and toggle switch instead of the corresponding metal parts on the 100 Year Anniversary Clipper. Also, the magic clip cordless features high-precision stagger-tooth crunch blades superior to the blades on the latter. What they do have in common is their housing and LED battery status indicator.

3 guide combs(#1/2, #1, and #1½ ), a red blade guard, a recharging transformer, a styling comb, a cleaning cloth, a cleaning brush, lubricating oil, and an operating manual